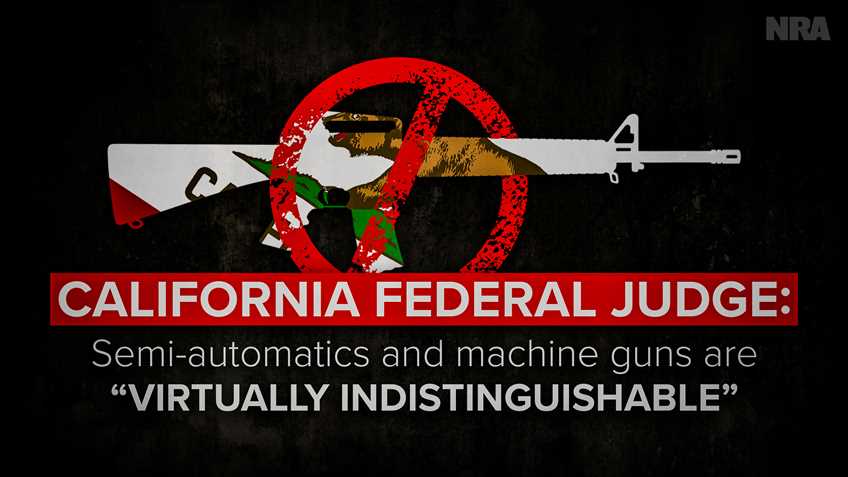 The ever-gushing fount of legal imagination that is California has provided the rest of America with another head-scratcher. On July 22, Judge Josephine L. Statonof the U.S. District Court for the Central District of California granted defendant California Attorney General Xavier Becerra’s motion for summary judgment in Rupp v. Becerra, a case challenging the latest iteration of the California Assault Weapons Control Act (AWCA). According to the judge, commonly-owned semi-automatic firearms like the AR-15 “are virtually indistinguishable” from fully-automatic machineguns.

The case goes back to April 2017, when plaintiffs Steven Rupp and the California Rifle & Pistol Association filed suit alleging that the AWCA violated Californians’ Second Amendment rights. The complaint pointed out that in the landmark District of Columbia v. Hellerdecision, the U.S. Supreme Court determined that the Second Amendment protects a right to keep and bear arms “in common use… for lawful purposes like self-defense.” The plaintiffs argued that therefore the AWCA, which prohibits standard configurations of commonly-owned semi-automatic firearms, is invalid.

Despite the desperate creativity of many judges who have confronted this issue, the Hellerdecision and its application to commonly-owned semi-automatic firearms is clear.

As noted by the plaintiffs in Rupp, the Heller decision interpreted the Second Amendment to protect the keeping of arms “in common use… for lawful purposes.” There is no question that the firearms targeted by the AWCA are common. According to the National Shooting Sports Foundation, Americans own more than 16 million semi-automatic rifles with detachable magazines. The AR-15 is the most popular rifle in U.S.

Further, there is U.S. Supreme Court precedent stating that the AR-15 is common. In the majority opinion in Staples v. U.S. (1994), a case which involved an AR-15, Justice Clarence Thomas wrote that some firearms are “so commonplace and generally available that we would not consider them to alert individuals to the likelihood of strict regulation.”

Moreover, the actions of both Justice Thomas and Justice Antonin Scalia following Hellerhave made clear that under a proper interpretation of the decision the Second Amendment should be found to protect the right to keep and bear commonly-owned semiautomatic firearms. In 2015, Justice Scalia joined Justice Thomas in a dissent from the denial of certiorari in Friedman v. Highland Park, which concerned a local so-called “assault weapons” ban. In the dissent, Justice Thomas explained,

Roughly five million Americans own AR-style semiautomatic rifles. The overwhelming majority of citizens who own and use such rifles do so for lawful purposes, including self-defense and target shooting. Under our precedents, that is all that is needed for citizens to have a right under the Second Amendment to keep such weapons.

To justify her decision, Staton relies on the popular and oft-abused two-step firearms restriction analysis. Under this framework, a court first determines whether a restriction burdens the Second Amendment right. Then, if the first test is met, the court determines the level of judicial scrutiny (strict, intermediate, rational basis) to apply to the burden. The test provides judges ample opportunity to twist the law to their whim and does not appear anywhere in the Hellerdecision.

In applying this dubious test, Staton found that California’s gun ban did not burden the Second Amendment right at all and that the second part of the analysis was unnecessary.

In Heller, Scalia implied the validity of laws prohibiting “dangerous and unusual weapons.” Later, Scalia alluded to a ban on M-16s as potentially lawful. According to Staton, “semiautomatic rifles are virtually indistinguishable from M-16s.” Therefore, under Staton’s thinking, a ban on commonly-owned semi-automatic rifles does not burden the Second Amendment right.

First, courts have shown an eagerness to read the “and” out of “dangerous and unusual weapons.” A simple reading of the Hellerdecision would dictate that Scalia contemplated weapons that are both “dangerous” and “unusual.” Whatever one’s opinion of the danger of semi-automatic rifles or the type of danger that Scalia may have been referencing, these firearms are not unusual. In fact, the AR-15 is the most usual rifle sold in America.

Second, it is remarkable that Staton finds semi-automatic rifles indistinguishable from M-16s. Semi-automatic firearms fire one round for each function of the trigger. Machineguns, like the M-16, are capable of firing more than one round for each function of the trigger. Unlike so much of the law, this isn’t vague. The two types of firearms are distinguished by concrete, demonstratable, and separate mechanical functions. Aside from Staton’s convenient confusion on the topic, the entirety of the U.S. regulatory apparatus has managed to grasp this simple concept and its implication for public policy for nearly a century.

The U.S. Congress distinguished between semiautomatic rifles and machineguns in 1934, when they enacted the National Firearms Act. Under the NFA, machineguns are distinguished from semi-automatics by a prohibitive tax and registration requirement. In 1986, Congress further distinguished machineguns by freezing their manufacture and importation for the civilian market.

Under 18 U.S.C. § 924, those who possesses a machinegun in furtherance of a crime of violence or drug trafficking crime “shall be sentenced to a term of imprisonment of not less than 30 years.” A person who uses an AR-15 in the same crime would face a 10-year mandatory minimum.

State legislatures are also capable of making this rudimentary distinction as evidenced by the diverse set of laws governing machineguns in various jurisdictions. California has distinguished semi-automatic firearms from machineguns. Cal. Penal Code § 16880 defines machinegun” as “means any weapon that shoots, is designed to shoot, or can readily be restored to shoot, automatically more than one shot, without manual reloading, by a single function of the trigger.” In fact, machineguns are so distinguishable from other firearms that the California legislature has devoted an entire chapter of the Penal Code to their regulation.

In his dissent from denial of certiorari in Friedman v. Highland Park, Justice Thomas lamented lower courts’ “noncompliance with [the U.S. Supreme Court’s] Second Amendment precedents.” The Ruppcase and too many others like it are why NRA will continue to support cases that will force intransigent courts to treat the Second Amendment with the respect commensurate with a fundamental, constitutional right. 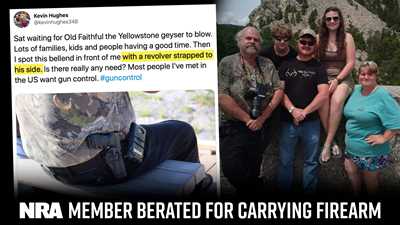 California: Gun Control Legislation Continues to Move Through the Legislature