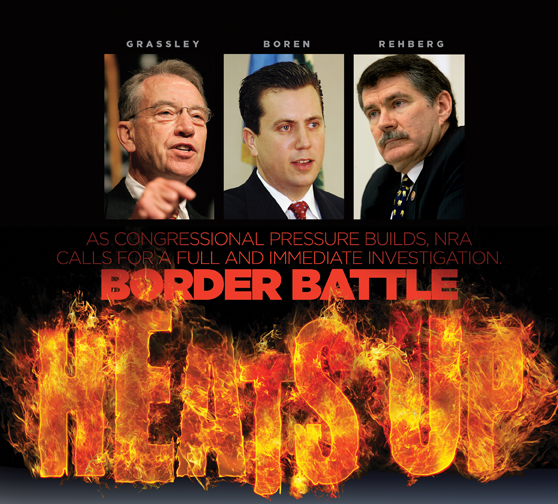 In spite of a rejection by the White House and a strong show of congressional support for gun owners, the Bureau of Alcohol, Tobacco, Firearms and Explosives refuses to give up its effort to force gun dealers in the border states to report multiple rifle sales. Meanwhile, the controversial proposal has collided with a fast-growing scandal over the agency's investigative tactics.

As we reported two months ago (see "Power Grab," March 2011), the BATFE requested "emergency" White House approval to use "demand letters" to require the nearly 8,500 firearm dealers in California, Arizona, New Mexico and Texas to report multiple sales of detachable-magazine semi-automatic rifles over .22 caliber. As we explained, the BATFE has no legal authority to demand these reports; the legal provision on which the agency relies was never intended--and has never been used--for such a sweeping collection of gun buyer information.

Perhaps for this reason, or perhaps just because the Obama administration does not want another policy fight, the White House turned down the BATFE's "emergency" request. But that only means the BATFE had to wait for the end of a public comment period, which has now expired.

In NRA's comments, we made clear that the authority to demand these reports would require a change in the law by Congress, which has already started taking steps to stop this power grab.

On February 18, Rep. Dan Boren, D-Okla., a member of the NRA Board of Directors, and Rep. Dennis Rehberg, R-Mont., sponsored an amendment to House Resolution 1, the huge omnibus government funding bill, to prohibit BATFE from collecting information on multiple sales of long guns. That amendment passed by a wide margin of 277 to 149. Supporters included almost every Republican and 41 Democrats.

Even though H.R. 1 is unlikely to ever become law due to the broader battle over government spending, the solid support for the Boren/

Rehberg amendment should be a signal to the BATFE that Congress strongly opposes efforts to collect this information on law-abiding gun buyers.

Opposition is not just limited to the Republican-controlled House. Not only have Democratic Sens. Max Baucus and Jon Tester of Montana criticized the BATFE for "bypassing the transparent legislative process," 17 Republican senators led by Richard Burr, R-n.c., have sent their own letter, calling the proposal "an end-run around Congress on a significant issue that affects the fundamental constitutional rights of our citizens."

Likely adding to the congressional skepticism are other recent events that have raised serious doubts about BATFE's operations and called into question whether the agency could effectively use the information it is demanding.

One issue is the effect of a new reporting requirement on gun traffickers themselves. As the National Shooting Sports Foundation pointed out in its comments on the proposal, firearm dealers--particularly in the border states--already work closely with the BATFE to identify suspicious gun sales and questionable gun buyers.

This voluntary cooperation has provided the BATFE with hundreds of leads on suspected gun traffickers. These leads are among the best tools available to the law enforcement agencies fighting to shut down illegal gun trafficking into Mexico.

But those leads could dry up if gun runners make smaller purchases to avoid multiple sales reporting requirements and stay off the radar of federal authorities. While multiple sales reporting would impose new burdens on dealers and bury BATFE in thousands of useless reports on legal gun purchases, the drug cartels would simply look to other sources on the Mexican and international black markets to meet their needs.

Adding to the problems with the BATFE proposal--and to congressional concern over the agency's performance?--is a massive new media and congressional probe into the bureau's current border enforcement efforts.

Over the past two years, as violence in Mexico has steadily increased, the BATFE launched Project Gunrunner, which was intended to target gun trafficking along the southwest border into Mexico. Now, a tragedy in Arizona has created serious questions about the program.

In December 2010, Border Patrol agents engaged in a shootout with Mexican nationals near the border in Arizona. That confrontation resulted in the death of Border Patrol Agent Brian Terry. The ensuing investigation revealed that two of the firearms found at the scene had apparently been sold in a suspicious transaction, with BATFE's knowledge.

According to late-breaking press reports and BATFE whistleblowers, gun stores that have contacted the BATFE about suspicious sales have been told to go ahead with the transactions, so that the agency could follow the buyers and track the paths of the guns. Some rank-and-file agents strongly opposed the program, but their concerns were apparently overruled by management. Ultimately, the agency couldn't prevent many of the guns from falling into criminal hands--apparently including the two guns recovered at the scene of Agent Terry's death.

U.S. Sen. Charles Grassley, R-Iowa, has asked the BATFE to address these allegations, noting that "There are serious concerns that the ATF may have become careless, if not negligent, in implementing the Gunrunner strategy." With ample documentation in hand to back up the allegations, Sen. Grassley asked for a full accounting of BATFE activities relating to the case.

The U.S. Department of Justice responded to Sen. Grassley in early February, but failed to provide him with the information he sought. He described the response as "little more than delay and denial." The department even went so far as to ask that Senate Judiciary Committee staff stop talking to law enforcement personnel.

But Sen. Grassley--a longtime Second Amendment supporter--doesn't give up easily. As this article goes to print, he continues to press both the BATFE and the Justice Department on the case--and NRA has also written to Judiciary Committee leaders in both houses of Congress, calling for a full and immediate investigation of this outrageous scandal.

The overall picture that has come to light in the wake of Agent Terry's death is ugly. The BATFE has tried to deny serious missteps in its investigative tactics, while at the same time claiming that a shortage of manpower and money prevents it from carrying out more effective operations.

Should the Congress give the BATFE more resources to carry out the same kind of investigations? That's not an idle question. All of us want the border to be secure and we want to end the murderous reign of the Mexican drug cartels. But if the BATFE can't safely and effectively manage the leads it already has, how would mandating thousands of additional reports be useful?

We've made NRA's position clear: The government does not have the legal authority to use "demand letters" to require multiple sales reporting on rifles. And the Congress has made clear that there is powerful opposition to any attempt by the BATFE to usurp that authority. It now remains to be seen if the BATFE will give up its quest to illegally expand its authority, or if Congress will have to take further action.

Be warned: Events are moving quickly. Chances are that by the time you read this the situation will have changed. NRA will continue to strongly oppose this unauthorized expansion of BATFE power--and to probe the wrongheaded and downright dangerous actions by the agency.

For NRA's letter to Congress, and for all the latest news on this fast-breaking story, go to www.nraila.org/border.

Siren Song The Truth About The President's Call For "Consensus"