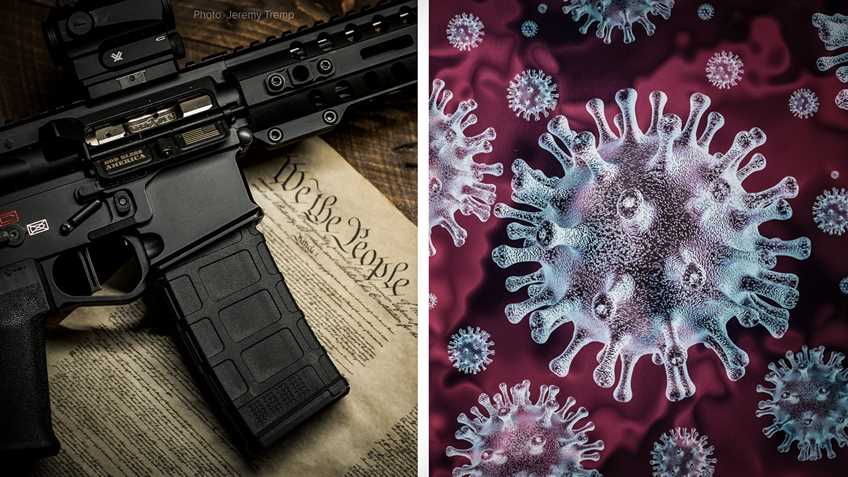 A recent article on a gun control news site laments that the COVID-19 pandemic has thwarted ballot initiatives to expand gun bans and restrictions. Initiatives in Florida, Oklahoma, Ohio and Oregon have stalled, allegedly due to the difficulty in collecting signatures. “Without the pandemic, we certainly would have been able to collect the signatures that we needed,” says a supporter of the Oregon initiatives.

Unpacking this “but for COVID” assertion more closely indicates that these gun control initiatives were not exactly slated for the slam-dunk success that their proponents would have voters believe.

In Florida, an NRA-supported challenge succeeded in getting a misleading gun ban kicked off the ballot. Anti-gun group Ban Assault Weapons Now (BAWN), a project of several gun control groups including the Brady Campaign to Prevent Gun Violence and David Hogg's March For Our Lives, had attempted to place the gun ban on the ballot in 2020, but failed to obtain the required signatures. Having secured roughly 175,000 signatures, in recent months the group's goals shifted to placing the measure on the 2022 ballot. With the Florida Supreme Court's decision, gun control advocates will have to start the ballot measure procedure over from scratch if they intend to continue this attack on Floridians' Second Amendment rights.

The Oklahoma ballot initiative, State Question No. 809 to rescind the state’s constitutional carry law, was already going nowhere fast. The campaign to undo the 2019 law had bounced from failure to failure before being halted by a court decision on June 23. In that ruling, a nine-judge panel of the Oklahoma Supreme Court unanimously concluded that the language of SQ 809 was inaccurate, misleading, and legally insufficient. SQ 809 was declared invalid and ordered removed from the November 3, 2020 ballot.

Rep. Jason Lowe (D-Oklahoma City), a primary sponsor of SQ 809, is quoted as saying that, “if the pandemic hadn’t happened, he’d have amended the language and gotten the measure in front of voters in November.” This is extremely doubtful. Rep. Lowe’s earlier referendum petition on the carry law (State Question No. 803) was dismissed by a court in October 2019 for being far short of the signature threshold needed to get SQ 803 on the ballot. A news article describing the fallout of the June 23 court decision acknowledged that the problem was timing. Lowe’s campaign to repeal the carry law would “not be able to start collecting signatures immediately,” and was “unlikely to have enough time to collect and turn in 178,958 signatures before the secretary of state’s Aug. 24 deadline for petitions to qualify for the November ballot.”

Timing was also the critical issue in Ohio. The push for an initiative petition demanding so-called “universal background checks” began in 2016, although the petition itself was not filed until three years later. The Ohio Attorney General rejected the petition summary because it was not “a fair and truthful statement” of the law being proposed. A new petition was submitted in July 2019, with the goal of collecting enough signatures to get the measure on the 2020 ballot. By pre-COVID December, though, the proponents announced they were pushing the timing back, with a new target ballot date in 2021. None of these delays can be due to pandemic-based stay-home orders.

The Oregon initiatives are not a straightforward case of pandemic postponement, either. In 2018, Initiative Petition 43, to impose a ban on commonly owned semi-automatic firearms and standard capacity magazines, was invalidated by the Oregon Supreme Court in a lawsuit brought by the NRA and other petitioners. Backers of the initiative opted to drop their efforts to get the measure on the 2018 ballot and to focus, instead, on the 2020 election. The sponsors of IP 43 subsequently brought forward three gun control initiative petitions, IP 60, 61, and 62. Although the NRA again challenged the ballot title language, after some changes to the language the Oregon Supreme Court approved the ballot titles in April. A news article states the petitioners had originally planned to “select one petition to gather signatures for after proposal language has been approved,” but no signatures had been submitted for any of these petitions to qualify for the 2020 ballot.

The narrative favored by gun control advocates is that their measures represent the views of the overwhelming majority of voters (assertions that “81 percent of voters in Oklahoma oppose permitless carry,” and “90% of Ohioans support background checks,” for example).

Before COVID provided an excuse for the failure of these measures to get on the ballot, many similar initiatives that were voted on were either rejected outright or passed by much smaller margins than would be expected given the claims of overwhelming support. A 2016 ballot initiative for universal background checks in Nevada was approved by just 50.45% of voters (but once passed, was found to be unenforceable as written). Question 3, a background check initiative in Maine that year, was rejected by voters.

The fact that initiatives on issues other than increased burdens on gun owners will be voted on in Oklahoma, Oregon and across America this November undermines the argument that the pandemic has wiped out gun control initiatives in 2020. A more plausible explanation is that now, with gun sales continuing to break records and an unprecedented number of first-time gun owners, Americans are less interested than ever in ineffectual restrictions on rights and freedoms.

Yesterday, the House of Delegates promptly voted 87-0 to concur with the Senate amendments to House Bill 2793. It now goes to Governor Jim Justice’s desk for his signature.

On December 23rd, ATF posted a document to its website indicating that its recently published Objective Factors for Classifying Weapons with “Stabilizing Braces” is withdrawn.

Today, the House voted 69-47 to advance House Bill 3096 after second reading. This clears the way for H. 3096 to receive a third reading tomorrow, where the House can vote to pass it.

More Laws for Government to Ignore?

Gun Controllers Want to Buy Lawmakers with Your Tax Dollars