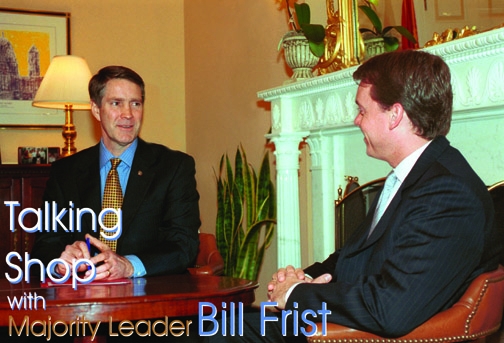 NRA-ILA Executive Director Chris Cox recently sat down with the new Senate Majority Leader to talk about freedom, firearms, and even a little football.

Cox: Senator, in 1994 you became the first practicing physician to be elected to the Senate since 1928, when Calvin Coolidge was in the White House. How do you compare your twin careers as physician and politician?

Sen. Frist: At first glance, it would seem that being a physician and a politician hold little in common. That`s what I used to think. My life`s work was to help patients live and have better lives through transplant surgery, one patient at a time. As time went by, and the problems in health care multiplied and became ever more complicated, I came to believe that perhaps I could help more people have better and healthier lives by working directly on health care policies that would affect millions at a time.

Cox: How would you describe your new job as Senate Majority Leader?

Sen. Frist: Well, as you know, Senate Majority Leader was not a position that I sought. I am here because my colleagues asked me to serve under special circumstances. It is a great honor--and a great responsibility.

The Senate is a great institution. And it`s important that each of us--each United States Senator- remember that we are here to serve, not be served. We have a real obligation to try to do the right things at the right times, so when our time here has passed, we will have left the world a little better place than when we arrived.

That is the goal with which I arrive at the Capitol each morning. It is not always easy, but these are complicated and difficult times that must be met knowing that every single American deserves the best we can possibly give.

Cox: In these times when our freedom is threatened, most Americans want their elected leaders to work together. Do you see partisan politics playing too big a role in the judicial nomination process?

Sen. Frist: I do believe that the judicial confirmation process has become too partisan. Nominees should be judged on their merits, period. When you have qualified nominees, the Senate should fulfill its constitutional role of "advise and consent" rather than "stall and obstruct."

Cox: When the Bush administration stated its position that the Second Amendment--we call it "America`s First Freedom"--guarantees individual citizens the Right to Keep and Bear Arms, some in the media and the anti-gun movement began having fits. What is your view of what our Founding Fathers intended?

Sen. Frist: I believe the administration has taken a reasoned and appropriate position on the Second Amendment. I personally believe that a law-abiding citizen should have the Right to Keep and Bear Arms with minimal interference from local, state, or federal government.

Cox: Senator, you have said in the past that "Congress has a role to play in restoring common sense to criminal law." What exactly did you mean by that statement?

Sen. Frist: Our criminal laws and policies should focus on deterring crime through prevention and through swift and certain punishment. That is what I mean by "common sense" laws. Some Members of Congress sincerely believe that passing more gun control legislation will reduce crime. I disagree with them.

Violent criminals are not deterred by gun regulations. And we need to remember that the criminals, not the firearms, are the enemy. Fortunately, crime rates declined in the 1990s, in large part because Americans did, in fact, go back to a common sense approach to law enforcement--vigorously prosecuting criminals and insisting on appropriate punishment for crimes committed.

COX: But there are those who claim firearms are the enemy. Anti-gun organizations responded to the September 11 attacks by immediately demanding legislation that would have effectively ended traditional gun shows. Your reaction was to cosponsor the Public Health Security and Bioterrorism Preparedness and Response Act, which President Bush signed into law. You obviously viewed this terrorist threat as very real.

Sen. Frist: That is why I worked so hard to pass the Act. We have made a lot of progress. Some of it you see, much of it you don`t, but real progress has been made. Does that mean we are where we need to be? No, not yet.

And it`s important to keep in mind that while we can never guarantee total protection against attack, we will never stop doing everything possible to make our communities safe. In addition, individuals and families should try to empower themselves with as much information as possible on what to do in the event of differing types of emergencies. After all, in a crisis, there is very little that is more important than good information. 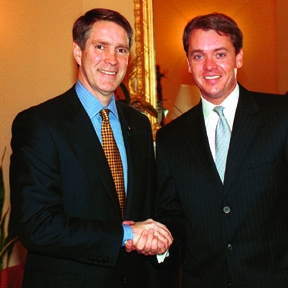 Cox: Following another tragedy that shocked the nation--the senseless rampage at Columbine High School--you remarked that in light of school violence "we must continue to work to spread the message of good character." Could you briefly expand on that?

Sen. Frist: Respect and responsibility are just as important. And we need to make sure we`re teaching our children to be responsible citizens who have good values and ethics. That is why I have cosponsored legislation to create a character education program at the Department of Education. That program provided over $16 million in grants last year to states and school districts across the country to teach our children the importance of caring, civic virtue and citizenship, justice and fairness, respect, responsibility, and trustworthiness.

Cox: One of the best things about the shooting sports is that they teach kids many of the lessons you talk about. Our home state of Tennessee has produced some great marksmen, and it has a long and proud hunting tradition. Do you have any advice for folks on how best to protect that tradition for future generations?

Sen. Frist: Over the years I have come to love and appreciate hunting more than I would have ever imagined. This great tradition, passed down from generation to generation, has brought me closer both to nature--and to my sons, who also love to hunt!

The best traditions endure because they are nurtured and passed down through generations. And I have to say that folks in Tennessee and elsewhere have protected the tradition of hunting so well throughout the centuries that I doubt I have much wisdom to add on that front!

Cox: Speaking of Tennessee, let me ask one last question, and I`ll preface it by saying that I`m well aware that we`re sitting right now in the heart of Redskins country. What were your thoughts on the Tennessee Titans this season?

Sen. Frist: I, along with everyone else in Tennessee, was disappointed that the Titans didn`t make it into the Super Bowl. But I have every hope that they will be there next season. The Titans can count on my support despite the fact that I work, as you said, in the heart of Redskins country.

Cox: Senator, thank you very much for your time.

IN THIS ARTICLE
Politics Second Amendment/Right To Arms
TRENDING NOW