Which Freedom Won't You Surrender 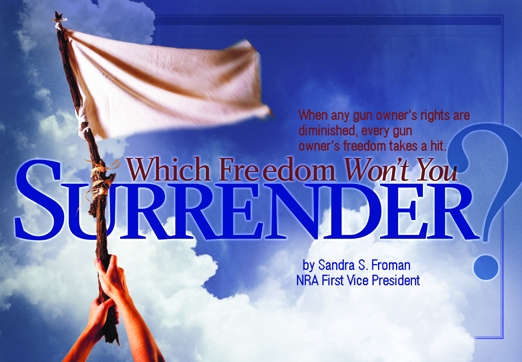 McCarthy and company have cleverly packaged their legislation as an "extension" of the semi-automatic gun ban passed by Bill Clinton. But their law isn't just an extension--it's a radical expansion.

Just for starters, their law would:

Not enough Americans are as outraged by this as they should be.

If politicians can ban an entire class of firearms for no good reason, then they can ban any and every firearm under equally empty arguments. So let's take a look at their arguments one more time, to see just how phony they are.

The Clinton-Feinstein-Schumer gun ban has been tested for almost a decade. Not only has it failed to reduce crime--researchers can't even find any relationship between crime and the guns that were banned. As a National Institute of Justice study noted, "the evidence is not strong enough for us to conclude that there was any meaningful effect" on gun homicide rates.

Why hasn't the ban reduced crime? Because, as that same NIJ study pointed out, "the banned weapons and magazines were never involved in more than a modest fraction of all gun murders" in the first place!

In fact, according to FBI statistics, rifles of any kind--semi-automatics being just a tiny subset of that group--are used in only about 5 percent of all homicides. More than 2 1/2 times as many murders are committed using only fists and feet.

Semi-automatic firearms are nothing new. They've been around for more than a century. When John Browning patented his famous A-5 shotgun in 1900, he had already been inventing and selling semi-automatic handgun designs to Colt for a decade.

Millions of semi-automatic rifles, shotguns and handguns are used by Americans for hunting, personal protection, recreation and competitive shooting.

In fact, NRA high power rifle competition is the most popular NRA marksmanship discipline, and the three rifles most commonly used in it are the AR-15 and M1A--both banned by the Clinton-Feinstein-Schumer gun ban--and the M1 Garand, which would be outlawed under the Lautenberg-McCarthy bills (S. 1431/H.R. 2038) now before Congress.

The guns banned aren't machine guns. They don't "spray fire," as so many newspapers and newscasts claim. Machine guns have been heavily regulated by federal law since the National Firearms Act of 1934. And any semi-automatic that can be readily converted into a machine gun is already classified as such by the Bureau of Alcohol, Tobacco and Firearms--and thus is also heavily regulated by that same 1934 law.

No, the guns banned by the Clinton-Feinstein-Schumer gun ban of 1994 are like any conventional firearm: They shoot one shot--and one shot only--with each pull of the trigger. They aren't any more powerful than any other gun, either. The AR-15, for example, fires the .223 Rem. cartridge, which many states prohibit for deer hunting because it's not powerful enough.

Aside from pistol grips, or bayonet lugs, or flash suppressors or other cosmetic features, the guns that are banned are no different from any other semi-automatic firearm in America. They all function the same.

Anti-gun activist Josh Sugarmann admitted this deception when he said in 1988 of semi-automatic firearms, "The weapons' menacing looks, coupled with the public's confusion over fully-automatic machine guns versus semi-automatic assault weapons--anything that looks like a machine gun is assumed to be a machine gun--can only increase that chance of public support for restrictions on these weapons." Another reason they target semi-automatics is because they seek to divide gun owners. They want you to think their bans only target the other guy's guns--and that your guns are safe, so you won't bother fighting to protect them.

Don't be duped. These are not naive, ignorant or misguided people who simply don't understand firearms. They know exactly what they're doing, and theirs is a carefully planned, deliberate and sophisticated strategy.

So-called "assault weapons" aren't their only target. Think about it: After the Brady law passed, did they declare victory and disband? No! After the gun ban of 1994, did they pick up, pack up and go home? No! And you can bet, as sure as the sun comes up tomorrow, that if they succeed in banning more semi-automatic firearms now, before the ink is dry on that law, they'll be back for more, and more, and more.

As The Washington Post wrote, "No one should have any illusions about what was accomplished [by the ban]. Assault weapons play a part in only a small percentage of crime. The provision is mainly symbolic; its virtue will be, if it turns out to be as hoped, a stepping stone to broader gun control." Or, as Sen. Feinstein admitted, "If I could have gotten 51 votes in the Senate of the United States for an outright ban, picking up every one of them, Mr. and Mrs. America, turn them all in, I would have done it." Who Cares About Assault Weapons? You Should! Maybe you don't own any of the 200 or more firearm models that were outlawed by the Clinton-Feinstein-Schumer gun ban. Maybe you think you never will want to own one. But you might someday.

That's what I once thought--until I tried shooting the AR-15. As a small framed woman, I find it difficult to hold many heavier rifles steadily. But the AR-15 is easy to handle. The AR-15's light weight and light recoil make it ideally suited to a woman shooter. Indeed, the fully-automatic military version, the M-16, is easier for women in our Armed Forces to handle than its heavier predecessors, the M14 and M1 Garand.

And ergonomic features such as a pistol grip or collapsible stock, while having no bearing on crime, do make firearms far more handy for women and men alike.

And that brings up a key point: Whenever the anti-gun lobby attacks this firearm or that public policy, they do so by claiming that firearms are useless and impotent for defending against crime, and yet maliciously omnipotent for committing crimes.

They can't have it both ways.

If firearms are useless for self-defense, as they claim, then why do police carry them--and with the anti-gun lobby's blessing? Let's get to the heart of the matter. These bans aren't about reducing crime or accidents or improving safety. They talk about hardware and inanimate objects--slabs of wood and plastic and steel--but the bans are really about your right, as a lawful, peaceable citizen, to own and use these firearms.

Gun bans say that you and I aren't safe enough, sane enough, sober enough, trustworthy enough, or responsible enough to exercise our constitutional rights. We know that's not true, yet too many of us allow that lie to stand unchallenged.

As gun owners, our most dangerous enemy is apathy within our ranks. We must not tolerate it any more.

When the NRA talks about preserving the right to keep and bear arms, it's not enough to nod and silently agree. You have to take a stand, you have to speak out--and it's especially important to do so when it's not politically popular.

Think of the great struggles for freedom throughout American history. The shot heard 'round the world from the foot of Concord Bridge. The abolition of slavery. The fight to give women the right to vote. The civil rights movement that Charlton Heston so nobly helped lead in the early 1960s.

Where would any of those movements be today if people who had nothing to gain and everything to lose didn't stand up, take a risk, and fight for what's right? Our freedoms depend on-- and demand--Americans willing to defend them when they're least in favor. The most important time to stand up for a right is when it has the fewest friends.

So: What have you done lately for the other guy's freedom? If a politician that you helped elect tried to shut down a newspaper that criticized his policies, would you defend that newspaper's First Amendment right to speak out? Or only if it was a newspaper that agreed with your views? If a billion dollar lobby tried to repeal the Fourth Amendment so that federal agents could search homes for illegal drugs at will and without warrants, would you stand up for your neighbor's constitutional rights? Or would you stand silent and allow the Fourth Amendment to be repealed simply because you have nothing to hide? What about gun bans aimed at the other guy? Would you stand up for his rights, because they're your rights, too? Or will you run and hide, and hope they don't ban your guns next? If there's anything history proves, it's this: When any gun owner's rights are diminished, every gun owner's freedom takes a hit.

If you want to keep your freedom to own a shotgun, a rifle, a handgun or any gun, you'd better stand up and speak out against the legislative monstrosity of the Feinstein-Lautenberg-McCarthy gun bans now.

So get up, go out and do something for the other guy's freedom. Because it's your freedom, too.

Is There A Child Psychologist In The House