Reasons to Lift the Bans on Sunday Hunting 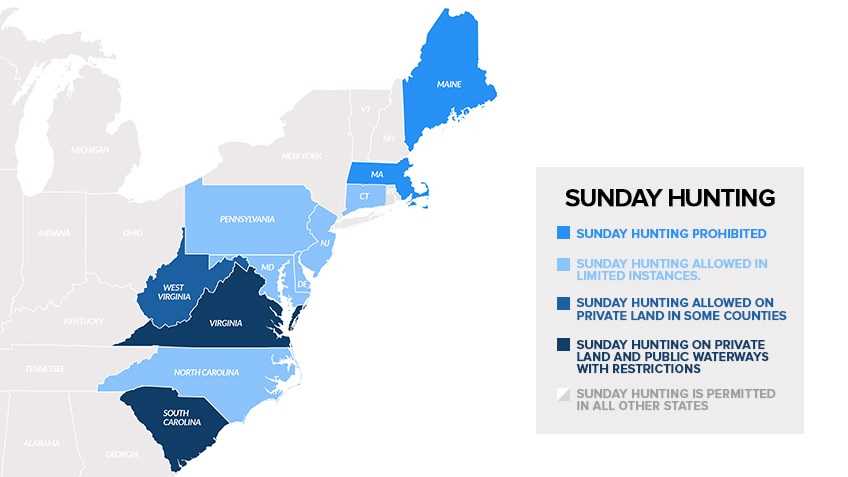 In 19th Century America, "blue laws" restricted many activities on Sunday, including Hunting.

Other outdoor activities are allowed on Sunday, including those that take place on public and private property, such as fishing, hiking and golf. Restrictions on Sunday hunting effectively treat hunters as second-class citizens and tacitly endorse the view of animal extremists that there is something wrong with hunting. Such a view ignores the fact that hunting is part of America’s heritage and hunters contribute billions of dollars to wildlife and conservation programs, through license fees and revenues generated through purchases of firearms, ammunition and archery equipment.

Restrictions on Sunday hunting effectively treat hunters as second-class citizens and tacitly endorse the view of animal extremists that there is something wrong with hunting.

Laws prohibiting hunting on Sundays are among the last of America's "blue laws," and for many reasons should be repealed.

Reasons to Lift the Bans on Sunday Hunting

States that have recently repealed Sunday hunting prohibitions have had no adverse impact on game populations.

The most common reason that hunters stop hunting is lack of hunting opportunity.

Since most hunters work Monday through Friday, a ban on Sunday hunting essentially cuts their available hunting time in half.

Many young people have school or athletic obligations on Saturday. Allowing Sunday hunting means that parents have more opportunities to hunt with their sons and daughters, sharing an important part of America’s heritage. Maintaining America’s large number of hunters is crucial to maintaining the revenues necessary to sustain crucial wildlife and wildlife habitat conservation programs. Anti-hunting groups support Sunday hunting bans as part of their general opposition to hunting.

Sunday hunting provides an economic benefit to many rural areas.

Every day that hunters are in the field, they spend money on fuel, food, lodging and dozens of incidentals that go along with a day’s hunt. You can see the positive economic impact Sunday hunting would have on the restrictive states here.

Out-of-state license revenues grow as a result of Sunday hunting.

The latest states to expand Sunday hunting opportunities are Connecticut, North Carolina and Virginia. In 2015, North Carolina added firearms to the legal methods of take while hunting on private land on Sundays, and Connecticut partially rescinded its ban to allow bow hunters to hunt deer on private property in overpopulated deer management zones on Sundays. In 2014, Virginia hunters experienced a successful, first season of Sunday hunting on private land and public waterways.

Two states prohibit hunting on Sunday for any wild game.

Those states—Maine and Massachusetts—each considered legislation to lift the bans in recent years.

Recently, the nine aforementioned states have taken some steps to allow hunting on Sunday.

None of these states has experienced the horror stories predicted by anti-hunting activists. Each continues to have healthy wildlife populations. Hunters continue to be safe and responsible. Church attendance remains unchanged. Landowner-hunter conflicts have not increased. In sum, Sunday hunting has had only a beneficial impact on these states and the future of hunting in them.