The NRA Collegiate Coalition (NRA CC) at East Carolina University (Greenville, North Carolina) is off to another great start this semester.  The group, founded by Giovanni Triana in 2017, is among the most active in the nation.  Giovanni took the initiative to start this group “to bridge the gap between staunch supporters of the Second Amendment and skeptical students with minimal exposure to the gun community.” They have in fact lived up to this mission, and embrace the full gamut of what it means to be Second Amendment advocates on campus.

This semester, which has only just begun, the NRA CC at ECU held their first meeting on January 22nd.  They have tabled at the Student Center as part of a recruitment drive and have scheduled an NRA University program for April.

During a typical semester, the NRA CC at ECU will participate in numerous activities.  In the past, members (21 years of age and over) have obtained their concealed carry handgun permit via a local NRA instructor. They have attended multiple gun shows in an effort to inform the public of their activities on campus and to raise funds for future activities.  They have hosted law enforcement officers and politicians as guest speakers at their regular meetings.  If you cannot find this group on campus, it is most likely because they are out exercising their Second Amendment rights collectively!

Multiple times each semester, the NRA CC at ECU will go to the range to enhance their marksmanship skills.  This is a great opportunity for new shooters to get a little practice in, and for advanced shooters to fine tune their skill set.  The goal is not to compete with each other, but to promote training and education amongst the NRA CC membership at ECU.

Meredith Watson, the current president of the NRA Collegiate Coalition at ECU, would like to see this group grow each semester.  She is driven to make the largest possible impact on campus while leading this chapter.  The invitation is open to all ECU students to become engaged in the group’s activities, and as you can see, there is certainly no shortage of opportunities.

The NRA is thankful for this next generation of Second Amendment leaders who are willing to go against the grain and promote gun rights at their schools. The success of the NRA CC at ECU is a direct reflection of the hard work put forward by Meredith, Giovanni and their officers. 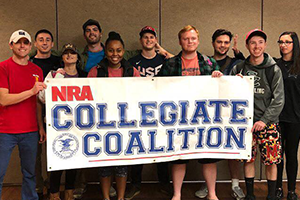 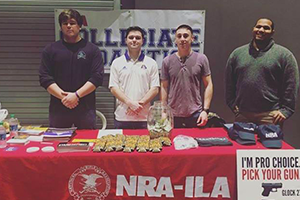 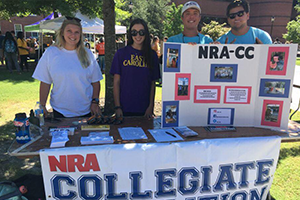 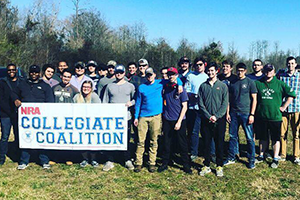 (*In this section, on a semi-regular basis, we will bring you stories of interest and programmatic updates that will be of interest and relevance to you as a grassroots activist.)