Despite passing the most sweeping gun control bill in the history of the state last session, the gun ban groups proved that their thirst to end your constitutional rights is far from quenched.  Yesterday, the Vermont Senate passed a 24-hour waiting period on handguns by a vote of 20-10.  Please contact your state Representative and urge them to OPPOSE S.169.

S. 169 will be heading to the House of Representatives, and the House committee could start working on this legislation early next week.  It’s important that gun owners continue to contact their lawmakers.  This pressure not only gives us a chance to defeat S.169, but it also sends a message that gun owners will put up a fight, discouraging more gun control legislation in the future.  NRA member calls and attendance at a recent public hearing made a difference as the original bill, S. 22, was scrapped and a new committee bill, S. 169, was introduced.

S.169 contains provisions from multiple bills, both good and bad, including S.22.  As written, S.169 creates a 24-hour waiting period for purchasing handguns.  The committee went on to incorporate “fixes” to last year’s magazine ban, as well as remove the sunset date on an exemption for competitors at shooting competitions, and address an oversight whereby responding law enforcement from out-of-state could be in violation of last year’s magazine ban.  While these “fixes” are indeed improvements over what was offered in the original bills, gun owners can never accept a waiting period on a constitutionally guaranteed right.

Again, please contact your state Representative and respectfully ask for a “NO” vote on S.169.

Delaware: House to Vote on Gun Control Legislation Next Week 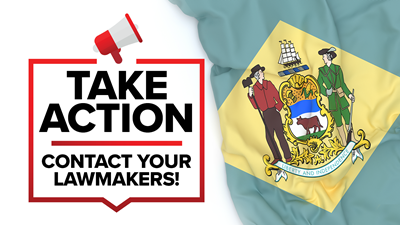