Week two of the Bloomberg school massive open online course on “Reducing Gun Violence” ran the same week that one of the lecturers was in the news for exclusionary comments that apply more readily to his course than to the intended target.

Jon Vernick, JD, MPH, told an audience at a recent Health Journalism conference that journalists shouldn’t contact NRA for comment on gun control studies because he thinks we aren’t qualified. “At least in my experience, journalists bend over backward to give organizations like the NRA or other gun-owning or opposition groups a chance to comment, sometimes on things that they don’t know very much about. And so, when I will do a research study and the studies get coverage, I sometimes wonder if it’s necessary to have a non-researcher from the NRA or another group respond.” Our public affairs staff set the record straight about our qualifications and Vernick offered a milquetoast approval of our qualifications to comment on research.

Thanks, Jon. Is foot-in-mouth a public health issue, too? We’ll wait.

In the meantime, we’ll turn our attention to the second module in the Coursera program. We’d like to raise several concerns with the material presented in this module (don’t fret, Jon – we’re qualified).

For starters, the 2nd Amendment is described as “a legal and political challenge” to gun control and “the elephant in the room” when talking about gun policy. Constitutional rights should not be considered “challenges” to any worthwhile endeavor, but that sort of (un)subtle bias is present throughout the week two presentations.

Most concerning was the discussion between Doctor Daniel Webster and Doctor April Zeoli. In the context of reducing domestic or intimate partner violence, Zeoli emphasizes “all the hoops” required to have a person’s Constitutional rights revoked. Those “hoops” are obtaining a conviction in a court of law for a disqualifying offense.

The hoops are due process – the foundational principle that supports our entire judicial system. Zeoli supports expanding the qualifying relationships for domestic violence restraining orders and revoking 2nd Amendment rights based on ex parte and emergency restraining orders. The subjects of such orders would not have an opportunity to defend themselves in court before their rights are revoked. Depriving someone of their Constitutional rights should not be an easy or convenient task, no matter how worthwhile the intended result may be. It seems as though the First, Fourth, Fifth, and Sixth Amendments would be sacrificed alongside the Second.

Other presentations in week two focus on “Litigation as a Public Health Strategy” and “Obstacles to Research, Policy Advancement, and Data Transparency.” Vernick himself leads the presentation on litigation and laments the enactment of the Protection of Lawful Commerce in Arms Act, which was passed to end a coordinated effort by anti-gun organizations to bankrupt firearms manufacturers and dealers through frivolous lawsuits. The lawsuits filed before the PLCAA were intended to bankrupt targeted gun manufacturers and dealers by forcing them to spend exorbitant amounts of money fighting absurd lawsuits. Vernick argues that “virtually no other consumer product” in the U.S. has the same sort of protection from liability as firearms. Internet service providers and small aircraft manufacturers both have similar levels of liability protection. And, no other consumer products face the same sort of organized, rabid opposition to their very existence as firearms.

There are no anti-car organizations bankrolling lawsuits they know will fail just to win a war of financial attrition against a small business – or even against a corporation. When you have all the money in the world behind you, all you have to do is force the other guy to choose how he wants to go out of business: spend all of his money defending himself against a frivolous lawsuit or close up shop while he still has a dime to his name. Public health officials regularly compare firearms to automobiles in terms of access and regulation, but no one wants to hold car manufacturers responsible for the criminal misuse of their products. That farce is seemingly reserved for the firearms industry alone.

The “Obstacles to Research, Policy Advancement, and Data Transparency” include the Dickey Amendment (acknowledged to not actually limit research) and the Tiahrt Amendment, which limits access to gun trace data and was supported by the ATF. The utility of the trace data for researchers is almost certainly overestimated, as it is limited to the point of sale.  The presenter claims that “law enforcement has been hampered by its ability to trace crime guns and implement these policies.” We’ve consulted the highly qualified research attorneys on staff and none agrees that law enforcement has been hampered in such a way. Law enforcement agencies still have access to firearms trace data and can still request a trace by ATF for recovered firearms.

These aren’t the only policies that are misrepresented or trivialized. Vernick notes in his presentation on child access prevention laws that “we don’t go door-to-door” to determine how gun owners are storing their firearms. Nice to hear that the Fourth Amendment isn’t to be completely destroyed on the Bloomberg School’s chopping block, but there are important questions to ask about these sorts of laws. What is the actual compliance rate among people subject to these laws? In other words, are people more likely to store their firearms “safely” if there is a law on the books that threatens them with punishment? Would a public awareness or an educational campaign be more effective than a punishment imposed after a tragedy has already occurred? All Vernick mentions is a variation between felony and misdemeanor penalties.

Dr. Webster and Dr. Crifasi offer a final wrap-up discussion of the week two material. They reiterate the major points their colleagues made in this module, including the impact of prohibition based on violent misdemeanors but again ignore their own work that found California’s prohibition on violent misdemeanors and universal background checks had no effect on firearms homicides.

Jon Vernick and his six coauthors on that study hold fourteen advanced degrees between them. We’re sure that Vernick and his colleagues in the Bloomberg School of Public Health Coursera program excluded that study for a good reason. 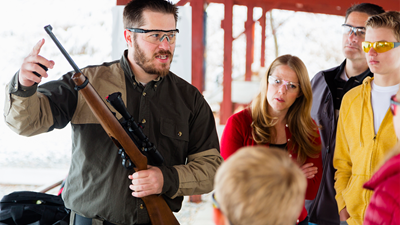