It’s an article of faith among gun control supporters that more guns will bring about more crime. For example, in the mid-1970s, the Brady Campaign, campaigning for a ban on handguns,[6] predicted: “There are now 40 million handguns owned by private individuals in the United States—about one gun for every American family. At the present rate of proliferation, the number could build to 100 million by the year 2000 (which isn’t as far off as you think). The consequences can be terrible to imagine—unless something is done.”[7] In 1979, when the group was known as Handgun Control, Inc., it updated its prediction, saying, “Right now over 50 million HANDGUNS flood the houses and streets of our nation. . . . HANDGUN production and sales are out of control.”[8]Gun control supporters have made similar doomsday predictions about Right-to-Carry laws, “assault weapons,” and “large capacity” ammunition magazines.[9]

More Guns—Since the early 1990s, the number of privately-owned firearms has more than doubled, from about 192 million to more than 405 million - including more than 167 million handguns.[10] Americans acquire roughly 10 million new firearms annually. More than 19.48 million Americans have carry permits.[11] The AR-15 is the most popular firearm in the country, and the number of these firearms Americans own has increased from several hundred thousand to nearly 18 million.[12] The number of so-called “large capacity” magazines - the regular magazines used in rifles like the AR-15 and in semi-automatic handguns designed for self-defense – numbered in the tens of millions decades ago and, today, are so common that the number in circulation is seemingly incalculable.

Despite gun control supporters’ predictions, murder and total violent crime have decreased by more than half since 1991. In 2014, total violent crime fell to a 44-year low, murder to an all-time low.[13] The rate in 2019 was slightly higher than in 2014 but still the 2nd lowest violent crime rate since 1971.

Less gun control – Over the last quarter-century, many federal, state, and local gun control laws have been eliminated or made less restrictive. The federal “assault weapon” ban, upon which gun control supporters claimed public safety depended, expired in 2004. The violent crime rate last year was 21% lower than it was in 2004 and the murder rate was more than 9% lower.

The federal handgun waiting period, for years a priority for gun control supporters, expired in 1998 in favor of the NRA-supported national Instant Check and the murder rate has since dropped 20%. Accordingly, some states have eliminated obsolete waiting periods and purchase permit requirements.

Every state allows residents to lawfully carry a concealed firearm. Fifteen states allow permitless carry, and Montana allows permitless carry outside of city limits. Eight states retain some discretion over who can obtain a permit, and the remaining states are shall-issue states: any law-abiding resident who meets the established requirements can obtain a permit to carry a concealed firearm.

[2] Estimate based on 1994 survey estimate from Philip J. Cook and Jens Ludwig, Guns in America: Results of a Comprehensive National Survey on Firearms Ownership and Use, available at http://www.policefoundation.org/wp-content/uploads/2015/06/Cook-et-al.-1996-Guns-in-America.pdf, Police Foundation.  Estimates for subsequent years are based on manufacturing data from the Bureau of Alcohol, Tobacco, Firearms and Explosives, “Firearms Commerce in the United States, Annual Statistical Update 2019” available at https://www.atf.gov/firearms/docs/report/2019-firearms-commerce-report/download.

[6] In 1976, the group, then known as the National Council to Control Handguns, explained, “The first problem is to slow down the increasing number of handguns being produced and sold in this country. The second problem is to get handguns registered. And the final problem is to make the possession of all handguns and all handgun ammunition - except for the military, policemen, licensed security guards, licensed sporting clubs, and licensed gun collectors - totally illegal.” (Richard Harris, “A Reporter At Large: Handguns,” The New Yorker, July 26, 1976.) In 1982, when known as Handgun Control, Inc., the group filed a brief in Quilici v. Morton Grove, in support of the Illinois town’s handgun ban. In 2008, Brady Campaign filed a brief to the Supreme Court in District of Columbia v. Heller, in support of Washington, D.C.’s handgun ban.

[7] NCCH, “There is now a nationwide, full-time, professional organization to battle the gun lobby!” pamphlet, no date, but circa 1975.

[10] Estimate based on 1994 survey estimate from Philip J. Cook and Jens Ludwig, Guns in America: Results of a Comprehensive National Survey on Firearms Ownership and Use, available at http://www.policefoundation.org/wp-content/uploads/2015/06/Cook-et-al.-1996-Guns-in-America.pdf, Police Foundation.  Estimates for subsequent years are based on manufacturing data from the Bureau of Alcohol, Tobacco, Firearms and Explosives, “Firearms Commerce in the United States, Annual Statistical Update 2019” available at https://www.atf.gov/firearms/docs/report/2019-firearms-commerce-report/download.

Have we become too paranoid about mass shootings?

Many Americans worry about when – not if – another mass shooting will occur, and a Gallup poll ...

Widespread Ignorance: Americans Wrongly Believe Most Gun Deaths in US Are Homicides and Mass Shootings

On some level, can you blame average people for getting the facts so wrong?  In light of the ...

here are few areas where President Donald Trump and Democratic presidential candidates agree, but both are now taking ...

New Report on Where Criminals Get Their Guns

From the Department of Justice. It’s nothing earthshattering, but it’s a good update to old surveys of prison ...

31% Blame Lack of Gun Control, Not Shooters in Gun Crimes

One-third of Americans think access to guns is more at fault than the killers in incidents of this ...

Apply the empirical method to your school-shooting anxieties

Throw facts at your anxiety, because it is in fact irrational. Something fatal can happen to all of ...

The Problem With the FBI's 'Active Shooter' Data

The FBI’s first report claimed that only once from 2000-2013 did a concealed handgun permit holder stop one ...

A senior editor of the left-wing website The Raw Story is facing blowback from conservative Twitter after he ... 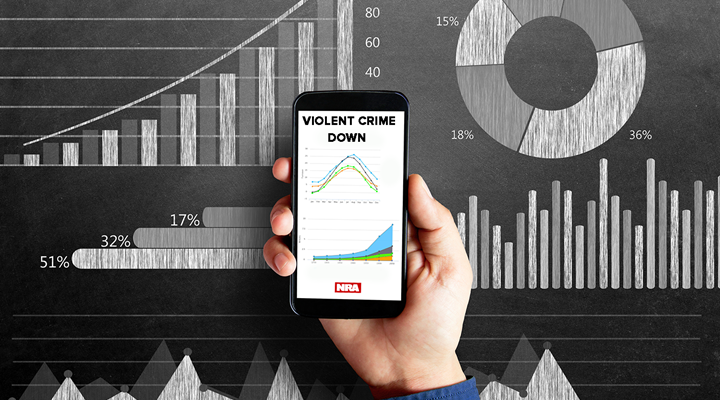 The FBI released its annual Crime in the United States report earlier this week. The report aggregates crime data, including ...

RELATED
Have we become too paranoid about mass shootings?
Widespread Ignorance: Americans Wrongly Believe Most Gun Deaths in US Are Homicides and Mass Shootings
NRA Statement on Texas Governor's Safety Action Report
Biden's role in 1994 crime bill under scrutiny by Trump and Democrats
New Report on Where Criminals Get Their Guns