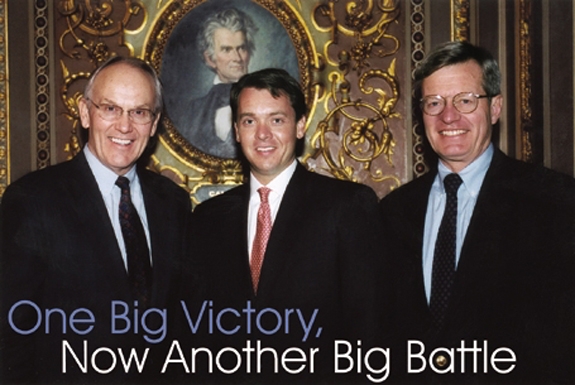 While we savor the U.S. House`s overwhelming vote on H.R. 1036,
our work goes forward. We now must pass S. 659/S. 1805 and end the
politically motivated lawsuits that threaten not only the
American firearm industry, but also our
Second Amendment rights and traditional rule of law.

By a solid margin of better than 2-to-1, the U.S. House of Representatives voted April 9 to send the gun-ban lobby`s lawsuit campaign to bankrupt the American firearm industry to the junkpile of history.

The bipartisan 285-to-140 vote that passed H.R. 1036, the "Protection of Lawful Commerce in Arms Act," represents both a victory for common sense--31 state legislatures have passed similar legislation--and a stinging defeat for those who attempt to subvert our nation`s judicial system to advance an unpopular political agenda.

That agenda is clear. The complaints filed in the more than 30 industry targeted suits have demanded court-ordered rules such as: one-gun-a-month purchase restrictions; bans on guns whose designs are "unreasonably attractive to criminals"; warranty revocations on handguns not resold through a dealer; and requiring manufacturers and distributors "to participate in a court ordered study of lawful demand for firearms and to cease sales in excess of lawful demand." What`s lawful demand in your household?

Our fight now moves to the U.S. Senate, where companion legislation, S. 659/S. 1805, by Sen. Larry Craig (R-ID) and Sen. Max Baucus (D-MT), has attracted not only 52 co-sponsors but also vituperation from anti-gun extremists.

Despite attempts by the media elite to deliberately mischaracterize it, S. 659/S. 1805 is a straightforward effort to restore the rule of law. The bill provides that lawsuits may not be brought against manufacturers and sellers of firearms or ammunition if the suits are based on the criminal or unlawful use of the product by a third party. Suits based on violations of federal or state law are not forbidden, nor are suits based on breach of contract or on product liability claims involving injuries caused by an improperly functioning firearm.

S. 659/S. 1805 also expressly allows suits for negligent entrustment, defined as "the supplying of a qualified product by a seller for use by another person when the seller knows or should know the person to whom the product has been supplied is likely to use the product, and in fact does use the product, in a manner involving unreasonable risk of physical injury to himself and others."

Prior to passage of H.R. 1036, the House Judiciary Committee`s Subcommittee on Commercial and Administrative Law, chaired by Rep. Chris Cannon (R-UT), heard testimony about these junk lawsuits.

Walter Olson, a senior fellow at the Manhattan Institute, told committee members that "the suits demonstrate how a pressure group can employ litigation to attempt an end run around democracy, in search of victories in court that it has been unable to obtain at the ballot box.

"Organizers of this campaign intend to use litigation as leverage to obtain sweeping nationwide changes in the manufacture and distribution of guns, including the de facto banning of some models, compulsory changes in gun design, and major new paperwork burdens and privacy sacrifices for gun owners and dealers."

Olson said anti-gun litigators were seeking out activist judges willing "to invent new law out of whole cloth," and that they realize that "even if defendants can fend off 98 percent of the cases, somebody somewhere is likely to break through, to the ruin of a given defendant or the entire industry."

"The plaintiffs in these cases," he said, "do not allege that members of the firearms industry have broken any of our nation`s over 20,000 firearm laws. Instead, they allege that the sale of a legal product in accordance with an extensive regulatory system somehow causes crime and that the industry is subverting the law to funnel firearms to the so-called criminal market. These allegations are both highly offensive and patently false."

Keane gave Congress a "conservative estimate" of industry legal costs to date to defend itself--in excess of $100 million. "This has resulted," he said, "in large, across-the-board price increases for consumers."

Representing Colt`s Manufacturing Company, Carlton S. Chen told the committee: "These lawsuits are dangerous not only to us but also to manufacturers of lawful products in other industries. Where will it end? Should General Motors be liable for an aggressive driver who crashes into another car? If the theory of these cases is widely applied, it could result in the bankruptcies of countless companies and the displacement of American workers."

NRA members are strongly urged to contact their U.S. Senators and request they support S. 659/S. 1805. The Senate switchboard number is 202-224-3121. Additional contact information is available using the "Write Your Representatives" tool at www.nraila.org.

The Bias Against Guns