Many have come to realize that Joe Biden rarely seems to make much sense, especially when speaking publicly. At his recent Rose Garden ceremony, where he announced his latest assault on the Second Amendment, he lied a number of times, and garbled the name of the federal agency tasked with enforcing federal gun laws.

At the Rose Garden ceremony, Biden announced these six actions:

“The Justice Department, within 30 days, will issue a proposed rule to help stop the proliferation of “ghost guns.”

While the text of the rule is not available at this time, it is likely that this rule is aimed at the self-made firearms market. The rule make also alter the regulatory definition of “frame or receiver,” so it could impact many aspects of federal firearm regulation. Please stay-tuned to www.nraila.org for more updates on this rule and what you can do to help stop it.

“The Justice Department, within 60 days, will issue a proposed rule to make clear when a device marketed as a stabilizing brace effectively turns a pistol into a short-barreled rifle subject to the requirements of the National Firearms Act.”

Like the first rule, the text is also not available. At the end of last year, ATF did publish a proposal for regulating certain firearms with attached stabilizing braces, but it’s unclear if this rule will follow that framework, or something else entirely. Please stay-tuned to www.nraila.org for more updates on this rule and what you can do to help stop it.

“The Justice Department, within 60 days, will publish model ‘red flag’ legislation for states.”

Red flag laws, also known as Emergency Risk Protection Orders, allow the confiscation of firearms from otherwise law-abiding gun owners without any due process. The administration does seem to admit that it has no authority to implement a red flag law at the federal level or fund these laws at the state level.

“The Administration is investing in evidence-based community violence interventions.”

These programs are unlikely to have any impact on the rights of gun owners, and some existing programs have shown promise in reducing crime because they target individuals who already have a proven propensity for violence.

“The Justice Department will issue an annual report on firearms trafficking.”

The last time ATF issued this report, the agency found that“[t]he most frequent type of trafficking channel identified in ATF investigations is straw purchasing from federally licensed firearms dealers. Nearly 50 percent . . . .” This is certainly an odd path for Biden to pursue given his past claims that the government has no time to prosecute these “paperwork violations.”

The direction this time seems to be to figure out how to blame self-made firearms for the actions of criminals.

What didn’t seem to stand out to many was the fact that his latest proclamations suggest that either he was incompetent while serving as vice president under Barrack Obama, or he is now knowingly exceeding executive authority.

You see, back in 2012, President Obama made Biden his point man on the administration’s efforts to enact gun control.

So, what happened? Not much.

In August 2013, the Obama Administration announced two actions on guns. The first would prohibit the importation of firearms that originated in the US, but were donated or sold to US allies. Before anyone begins to think we are talking about fully-automatic or select-fire arms, we are not. The firearms in question are generally semi-automatic rifles developed for WWII—think M1 Garands and carbines.

The firearms were, and still are, perfectly legal to be manufactured and sold in the US. People interested in the ones Obama and Biden prohibited for importation are generally collectors, and simply interested in owning a piece of history.

As nonsensical as it sounds to prohibit the reimportation of firearms that are legal to manufacture, sell, and possess in the US, then-VP Biden proclaimed of the action, “It’s simple, it’s straight forward, it’s common sense.” At least nobody has had to adjust his teleprompter over the last eight years, as that sounds an awful lot like the same speech he gave last week.

The other action taken was to expand the regulations on who would be required to undergo a background check when registering items regulated under the NFA. This would cover things like machineguns, short-barreled rifles and shotguns, and suppressors.

Eight years later, though, Biden has suddenly come up with a number of executive actions, claiming, “I’m going to do everything I can to protect the American people.”

The question nobody seems to be asking is, why didn’t he propose these things in 2013? Was he not willing to “do everything I can to protect the American people” back then?

NRA will take all available legal and political action to defeat Biden’s new gun control. While gun owners will have to wait to take action on any proposed rules from ATF, please let your senators know that you oppose Biden’s nomination of anti-gun lobbyist David Chipman to lead the ATF. 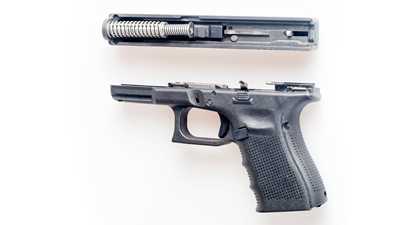