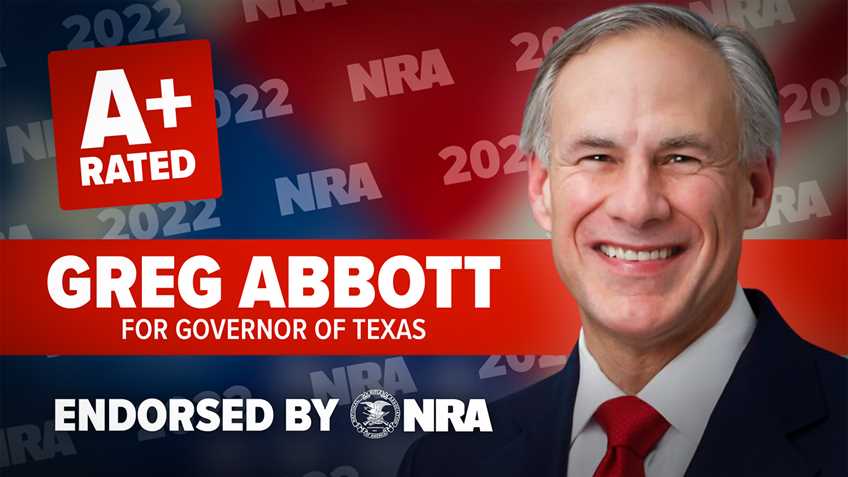 “As both attorney general and governor, Abbott has tenaciously defended the Second Amendment rights of all law-abiding Texans," said Jason Ouimet, NRA-PVF chairman. “His significant impact on the advancement of gun rights cannot be overstated as Texas has become a model for other states to follow.”

Abbott has earned the highest attainable “A+” rating from the NRA. That rating is reserved for elected officials who have a demonstrated record of leadership in the fight to promote and defend the right to keep and bear arms.

NRA Executive Vice President Wayne LaPierre said, “For generations, the NRA has fought for the freedom of tens of millions of Americans from all walks of life.  We’ve worked with good folks from all across this great country in courthouses, statehouses, and in our nation’s capital to make sure good people have the right to defend themselves, the right to hunt and to the right to own a gun for any lawful purpose.  There have been principled leaders throughout my career at the NRA. And, today, the National Rifle Association Political Victory Fund is endorsing one of the best: Texas Gov. Greg Abbott.”

Charles Cotton, NRA president, said, “Texas is leading the way when it comes to protecting the Second Amendment rights of its citizens. This is because of the strong leadership of Gov. Abbott and his commitment to honor what matters to Texas. We need more governors like Abbott, and that’s why the NRA is here today to proudly endorse him.”

Ouimet concluded, “Greg Abbott is a staunch defender of the Second Amendment and a great friend of gun owners. We encourage all Texas NRA members, supporters, gun owners and sportsmen to vote Greg Abbott for Governor in the March 1 primary election.”