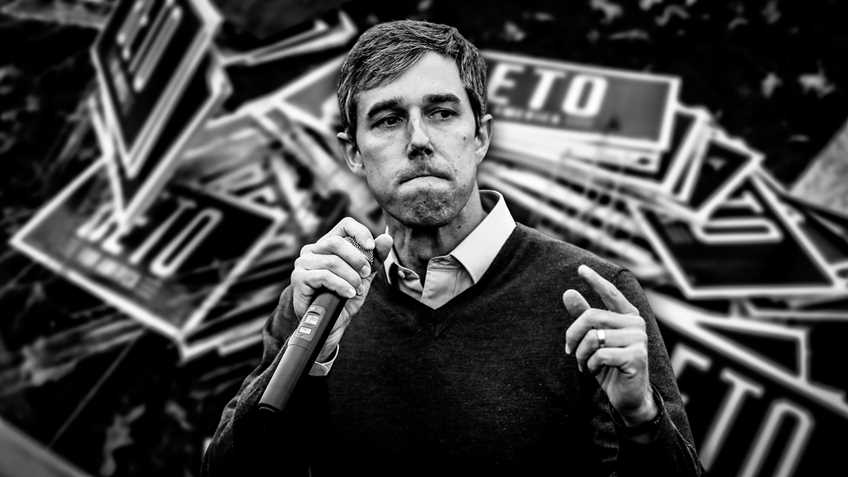 “We support the Second Amendment. If you own a gun, keep that gun. Nobody wants to take it away from you – at least I don’t want to do that.” That’s what Robert Francis “Beto” O’Rourke told voters in an April 2018 radio interview, when he was running against Republican Ted Cruz in the Senate election in Texas. Asked specifically about AR-15s (“I own an AR-15. A lot of our listeners out there own AR-15s. Why should they not have one?”) Beto responded (at the 0:24 mark), “To be clear, they should have them. If you purchased that AR-15, if you own it, keep it. Continue to use it responsibly.”

As a 2020 Democrat Presidential candidate, though, Beto became best known for his total repudiation of those sentiments. During the primary debate in Houston on September 12, 2019, he famously proclaimed, “Hell yes, we’re going to take your AR-15, your AK47...!” His campaign capitalized on this by selling t-shirts with the catchphrase, and Beto reiterated his call for mandatory confiscation in a CNN interview. Asked “Are you, in fact, in favor of gun confiscation?,” he replied, enthusiastically, “Yes, when it comes to AR-15s and AK-47s…”

This melodramatic rhetoric did nothing to improve his chances and he dropped out of the race a few weeks later. However, his call for mandatory gun confiscation was echoed by Kamala Harris and Joe Biden, who went so far as to promise that Beto was “going to take care of the gun problem with me. [He’s] going to be the one who leads this effort. I’m counting on ya.”

Beto is now running as the Democratic gubernatorial candidate in “Come and Take It” Texas. News reports indicated that he initially stood by his toxic stance on guns and confiscation, but – true to form – did another complete about-face ahead of the March primary amid speculation that it was just too much uncomfortable baggage in the intensely pro-gun state. At a campaign stop on February 8, Beto responded to a question with, “I’m not interested in taking anything from anyone. What I want to make sure that we do is defend the Second Amendment.” Deafened, perhaps, by the collective sound of jaws dropping across America, a spokesperson for O’Rourke’s campaign “declined to comment” on this stunning reversal.

The latest, but doubtless far from final, shift from Beto occurred at the SXSW 2022 festival in Austin, Texas, in a March interview by Evan Smith, CEO and co-founder of The Texas Tribune. “After some prodding, O’Rourke gave a direct answer” on his position that month on mandatory firearm confiscation:

I don’t think anyone should have [assault-style weapons]. And if I can find the consensus within the Legislature to have a law in the state of Texas that allows us to buy those AK-47s and AR-15s back, we will. As you said earlier, I cannot mandate or dictate anything as the next governor of the state of Texas. I’m going to have to do this by listening moving forward.

As positions go, this new one registers on the confiscation dial somewhere between “Hell yes!” and “Not interested in taking anything from anyone,” being “I hope I can get the Legislature to fall in with my gun confiscation plan.” We’re not seeing this slogan on Beto’s campaign t-shirts just yet, so a fresh take (or two, or more) is certainly possible between now and the election in November.

Perhaps Beto genuinely believes that defending the Second Amendment is completely compatible with his gun bans and mandatory gun grabs of ordinary semiautomatic firearms. Or maybe he’s still holding out hope that Joe Biden will make good on his promise, and is keeping his anti-gun credentials in working order.

Certainly his most recent swivel demonstrates an obvious lack of situational awareness, given that gun buys by law-abiding Americans have surged to unprecedented highs since (and possibly because of) his “Hell yes!” threat in 2019. Texas alone logged over 2.3 million NICS background checks in 2020 (compared to less than 1.5 million in 2019), many of which involved first-time gun owners. These Texas voters are unlikely to find Beto’s lip-service to the Second Amendment convincing, especially as, in the larger context, his shameless vacillating calls to mind the worst stereotype of the pandering, habitually opportunistic shill of a politician who will say anything he thinks will help elect him.

For those who are confused, uncertain or mystified about where Beto stands on firearm rights, please know our position is simple, straightforward and unchanged. Hell no, Beto.